Home / EnableSysadmin / personal / In the Days of Text

In the Days of Text 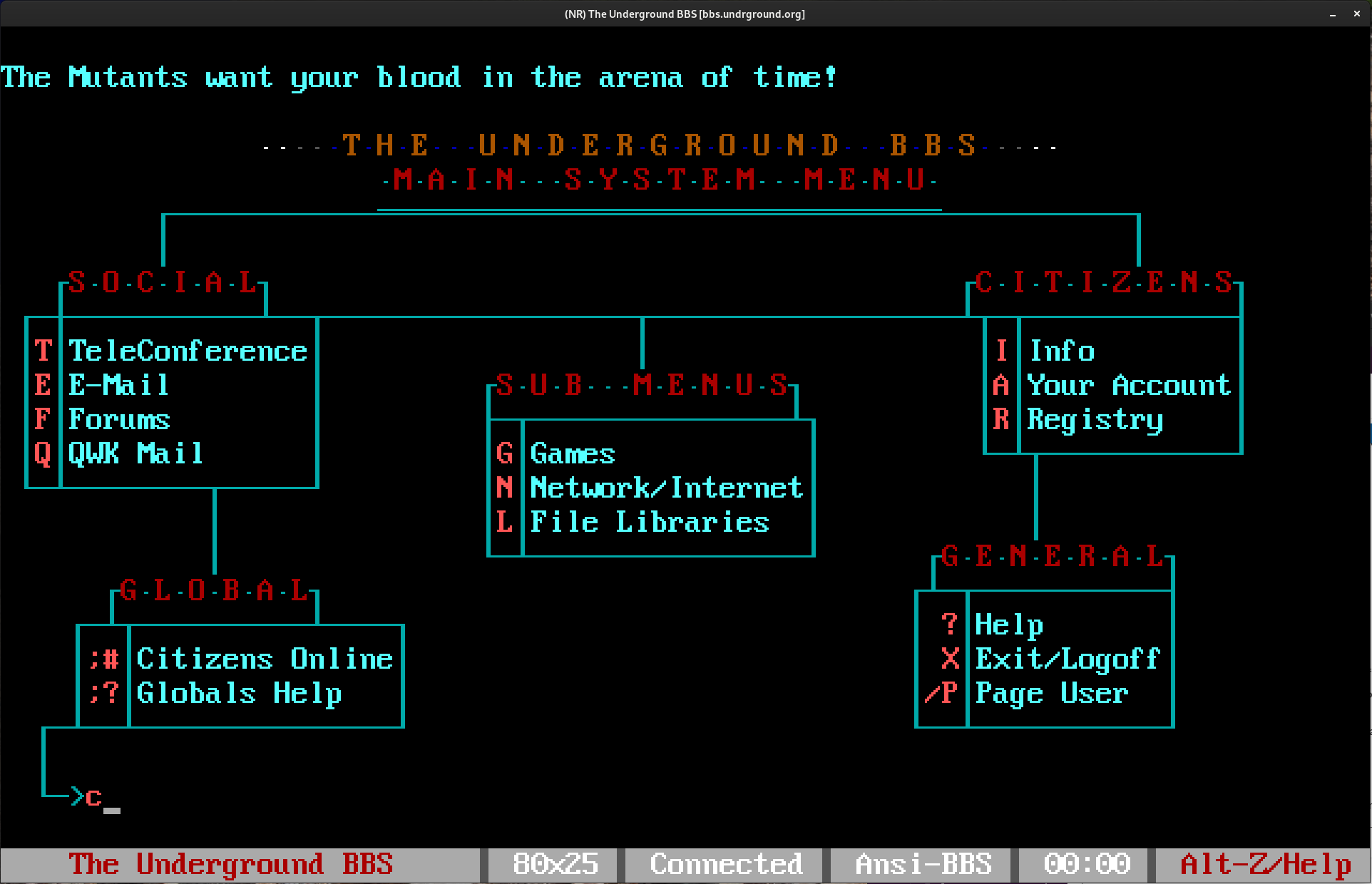 This is our world now… the world of the electron and the switch, the beauty of the baud.

There was a time that some of us can still remember.  A time before fast networks ruled the industry.  When connection speeds over 1mbps were blazing fast, and most of us lived on 9600 baud (or much much less, I actually stated at 1200 baud).  In those days, a simple graphic could take minutes to download, and because of this, everything was still primarily text-based.  This is when I got into these computer things.  I was a young teenager when my father bought his first “modern” PC.  I’ve mentioned before how there’s been a computer in my home for as long as I can remember, but I won’t go into that here.  In 1993, my dad brought home a Gateway 2000 486/SX.  With a whopping 4MB of ram, and a whole 320MB hard drive.  It ran MS-DOS 6.21, and Windows (for workgroups!) 3.11.

In those days, computers just weren’t that fast.  That little 486 had trouble running Doom, forget about the multimedia experience that today’s internet is.  So the majority of what you could do online was text.  On top of that, “on-line” wasn’t what it is today.  The internet was still a very new thing, and not everyone could get access to it.  Broadband was not a thing. Couple that with the fact that my dad was a telco guy, and knew that the internet was pretty well the wild wild west at the moment…  I wasn’t allowed anywhere near it.  That… however… just made me want it that much more.

The Bulletin Board System

Before the internet was available to me, I’d learned about Bulletin Board Systems (BBS’s).  These were stand-alone systems, usually in someone’s basement, or bedroom, running specialized BBS software.  You could connect to these systems directly over a phone line.  In a lot of ways, these systems were the birthplace of the commodity internet, even if nobody remembers them.  A SysOp (System Operator) was the person who operated the BBS.  Their job was to make sure the thing was running, and in most cases, they were also the person responsible for building it.  Some BBS’s had a team of folks running them, and they charged a fee for the use of the BBS; these systems usually had modem banks that allowed several people to dial-in at once.  This…this is what really intrigued me.  Multi-user communication.  It’s what led me into the I.T. field.  As a teenager, while my peers were playing football, or getting into dating girls, I was fascinated by computer communication.  I wanted to BE a SysOp.

These BBS’s facilitated online gaming, before MMO’s we had MUDs, before Words With Friends, we had Crosswordz, before we had XBox Live, we had The Game Connection.  I lost track of the number of hours I spent in the fictitious world of Tele-Arena, battling aliens in Trade Wars 2002, and playing up to 4-player Doom Death-Matches through Game Connection. Even after I finally got reliable access to the internet, I still kept coming back to that BBS.  It all eventually had to end though.  In late 1999, the BBS I called home, and one of the few still in operation locally, Cyberspace 7, had suffered a power surge, frying its GalactiBox (the modem bank they depended on for multi-line dial-in).  Interest in BBS’s was dwindling, except for enthusiasts like myself, so instead of resurrecting the board in a telnet only fashion, they took one last tape backup and powered the system down.

The software CS7 ran was written by a company called Galacticomm.  It was called The Major BBS, and later Worldgroup.  I had toyed with pirated copies of the board, and some of the games I loved, but what I really wanted was a legal copy that I could run my very own BBS with.  I wanted to fill the void for my friends, the community I’d been a part of, by bringing up something just like CS7 so we could all continue to battle orcs and minotaurs or defend the space lanes.  It was all so expensive though.  I couldn’t afford Worldgroup, I think it was selling for thousands at the time, and I was just barely an adult.  I didn’t have any significant income, and expensive proprietary software was just out of my reach.  So I kept scratching the itch on a very small scale with my pirated copy of the board, never making it public enough to catch anyone’s attention.  The ownership of Worldgroup got really murky for a while there, and I never knew if some behemoth of a company was going to try to track me down for running a pirated BBS.

Calling on my network

Then one day, a few years after CS7 had vanished, I got an email from one of the other enthusiasts that I’d kept in touch with.  He’d been in touch with the old SysOp of CS7, and he’d worked out a deal to sell the whole shebang.  Problem was, he couldn’t afford it alone, so he wanted someone to go in with him.  He was thinking it’d be a few hundred dollars, and in my head, it sounded like something I could pretty easily pay half of!  He needed me to go visit the old SysOp, he ran this computer shop in a nearby town (and he still does as far as I know).  So, one day on my lunch break, I drove on over and paid him a visit.  I’d met the guy before, I think he remembered me, maybe not, I’d been on his board for long enough, but in those days you almost never saw someone’s face.  So who knows?  He gave me a box of stuff: floppies, hardware, CDs, all kinds of manuals, and he tells me to go through it, and let him know what I think it’s worth.  So I took it, and did just that.  After a few days, and some conversations with my buddy, we decided to offer a few hundred bucks.  I did, and never heard back from the guy.  Followed up several times, never a response.  To top it off, my buddy never even coordinated with me to get copies of the stuff we’d gotten!  So I had it all, the BBS install software, the software collections that they had hosted with it, and most of all, that last tape backup.

I gave the whole situation time to settle and after a few months went by, and no one involved in this “sale” ever responded to me, I decided it was mine, and I got to work.  A friend of mine was able to restore 4 out of the 5 backup tapes, which gave me a broken copy of the BBS to try to fix.  I had my pirated board to use as a source to replace missing files from, and after an overnight hack-a-thon, I had a working BBS again!  All up and running under the registration of the now-defunct Cyberspace 7.  I renamed the board to the name I’d chosen for my pirated board, The Underground BBS, and my life as a SysOp began.

The landscape had changed, BBS’s were all basically nostalgia systems, for folks like me who wanted to play the games they’d played as a kid.  No more dial-up, it was all done over telnet.  Most of the companies that were making games and addons for The Major BBS had rolled up their carpets and either moved on to better things, or just went belly-up.  The mastermind behind The Major BBS had actually committed suicide several years earlier, and Galacticomm sort of vanished.  I ran The Underground BBS for several years and had a number of regular users who showed up to play Tele-Arena, mainly.  Eventually though, with regular users dwindling, and my own life getting more hectic as my career and family, grew, The Underground BBS was shut down.

There is a new hope though.  A fellow by the name of Rick “Questman”, invested a considerable amount of his own money, and time, to track down and purchase the rights to many of the old software that made these BBS’s popular.  Tele-Arena, Trade Wars 2002, and even Worldgroup itself.  He and several enthusiasts like myself are now involved in “The Major BBS Restoration Project”, which is an effort to modernize the Worldgroup code base, re-brand it back to The Major BBS, and then make it something that folks can start building communities with again!  It’s slow-moving but pretty exciting!  There’s currently a Facebook group and a private Slack workspace, and now a re-vamped message forum!.  If reading this article has inspired you to get involved, please reach out.  The more excited developers we can get around this project, the better.

I hope this trip down memory lane has been interesting.  I’ve thought about rekindling The Underground BBS a few times.  I have a backup of all of its data just sitting around in an archive somewhere.  Maybe one day it will be reborn on this updated codebase, and we can all get together and dart the sorceress.  😉

A few weeks after writing this article for Enable Sysadmin some movement has picked up in the Restoration Project. The ownership of The Major BBS has changed hands, so now Questman (mentioned above) can focus on addons, and the new owner of The Major BBS, can focus on the core system. I’ve brought the Underground BBS back online, and you can find it at telnet://bbs.undrground.org

It’s an exciting time! There are a lot of changes planned for the core Major BBS, and the team is looking forward to the first release of The Major BBS (v10) since the change of ownership. You can follow the progress on The Major BBS forums.