Home / linux / personal / A week with the Lenovo Legion y740

A week with the Lenovo Legion y740 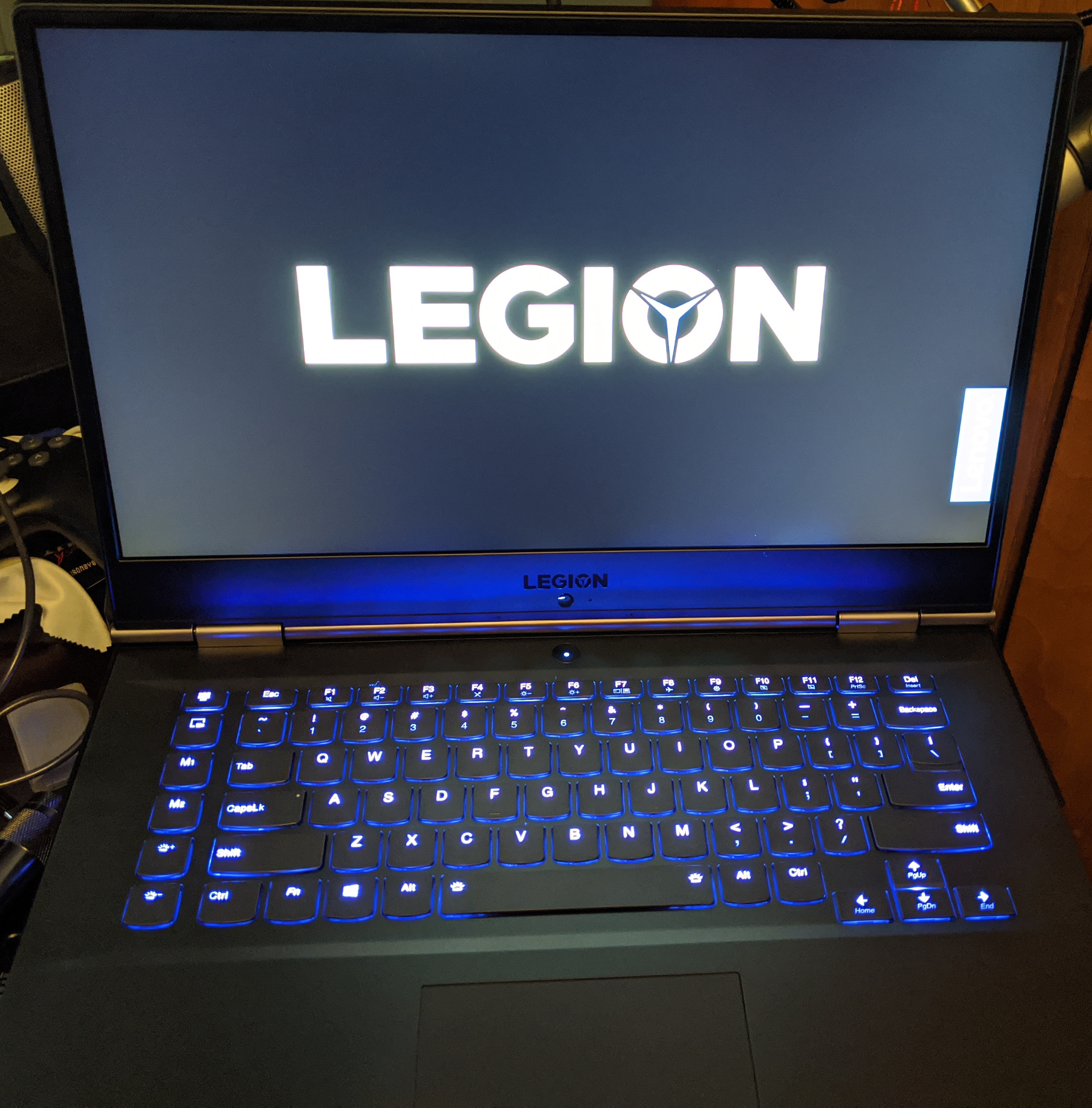 I’ve got a few laptops. A Dell Inspiron from around 2015, and a Macbook Pro from around 2014. I’ve been dual-booting the Dell for gaming on Windows, and everything else on Fedora. The Macbook I run as Apple intended, with MacOS, and I use it mainly for video/content editing. Both machines are fine, but starting to age. The Macbook has held up VERY well, the Dell.. Eh, it’s ok, and certainly functional, but it’s showing some wear. Functionally both laptops have held up pretty well. However, neither of them handle 4K video well. Editing 4K which is something I’ve only recently started to dive into. On the Macbook, its choppy, even just playback is choppy, editing is kind of a nightmare.

So I decided to look around for a newer and faster laptop. I looked at Dell, and I looked at Lenovo. Dell because they’re familiar, and Lenovo because I can get a discount through my employer. I didn’t look at Apple. Mainly because I love their hardware, but its waaaay too expensive for me. The Macbook I have came from my previous employer, who was gracious enough to let me keep it when I left. I landed on the Lenovo Legion y740.

The Legion product line is Lenovo’s gaming lineup. I figured, I do enough gaming, and generally gaming systems are also good content editing systems. You can certainly build a nice business laptop that will be an editing powerhouse, but since I do game a little, it just makes sense to get a decently powerful gaming system. It’ll play games, and edit, which are my two primary uses for this laptop.

The core specs are decent. Intel Core i7 2.6ghz, 32G of memory, internal 512G SSD for the OS and an internal 1T spinning disk for storage. I also went with the GeForce RTX 2060. My primary goal is a decently fast Windows system that I can run adobe creative cloud on for video and graphics editing, and gaming. Secondary, I’d love to be able to dual-boot it into Fedora like I do my Dell.

Since I don’t often get my hands on a nice shiny new piece of hardware like this, I figured I’d write up some opinions in a bit of a review here after using this new laptop as my primary personal machine for a little over a week. I received my new laptop on 12/30/2019, and I’m writing this on 1/7/2019. I’m not going to give you benchmarks, and graphs, this is a hands on, touch, usage, and feel review.

I’ll give you the things I like first, because I’m generally a positive guy.

Speed wise, this thing is great. I am by no means disappointed. Its boots very fast. Windows, which I already have a low opinion of, is snappy and responsive. My Adobe suite apps are pretty dang quick, and my 4K video editing problems are gone.

Gaming is great! I’m not a huge gamer, I usually play older games, and I’m not out there spending $80 on the latest and greatest releases. I do play Doom (the new 2016 release) and I’ve played that on this laptop at the highest graphics settings, and its flawless. Granted this is an older game. I’d love to try out something new on it just to see what it’ll do. Maybe I will do this and update this post later. I also do some streaming to youtube, which I’ll probably do on this machine in the future, but I have not tried it yet.

The overall build of the machine is nice, the case is decent, it looks like it should wear well, my Dell had these fins on the back for the vents that were prone to breaking off. The vents on the Lenovo look like a much better design. The finish on the outside of the laptop is a nice matte, doesn’t seem to attract scuffs or fingerprints, but its decently grippy. My Macbook was difficult to just carry around because the smooth aluminum exterior was hard to grip, but the Dell had an almost rubbery finish with gripped REALLY well, but was a nightmare to keep clean looking. I ended up covering it in stickers. Which I’ll probably do to the Lenovo over time anyway.

The not so good

So I want to preface this with one statement. I do like this laptop, but there are a few things I don’t love, and I feel like I should mention them.

First, there’s no SD card reader. This is partially my own fault, I didn’t check for one when I ordered it, I assumed that it would have one. Every modern laptop I’ve seen does. I can work with this, but it’s disappointing.

Second, this laptop has a really cool RGB backlit keyboard. Its got some neat features, like an echo effect, and you can set the color of the keys. Really neat.. The downside? You cant write your own defaults to the keyboard. At boot-up the keyboard reverts to the hardware default, which when I set it up was a default blue. Fine, but then I received a firmware update which turned the default into this cool looking, but obnoxious over time, rainbow pinwheel effect. I had to contact Lenovo about it, and their answer? Revert the firmware. This is a really disappointing feature Lenovo. They said that many people complained about the rainbow effect, and that’ll change with the next firmware, but I doubt it’ll change the program-abilty. You can change the color using software included with the laptop, in Windows, but during boot-up, or if you’re in the BIOS for something, or god forbid youve booted another OS… You’re stuck with the default. Oh, and with said software running, you cant cycle through the modes, like the echo mode I mentioned above, you just get whatever the software is set for.

That brings me to the BIOS. it’s fine, but at boot time, there’s no “press X to enter setup”, its hidden away. Next to the side USB port on the laptop, there’s a pinhole. To get into BIOS, or get a boot menu, you have to power off the laptop, and press this button with a pin. Yes, a pin, a paperclip doesn’t even fit. This is annoying, but I can see how your average user wouldn’t care about it.

And then… There’s the disk setup. From Lenovo, the BIOS is configured to run the disk controller in RST mode, not ACHI. This makes the boot disk inaccessible to Linux. Again, not a problem your average user will have, but in my case, it means I cant just install Fedora on a second partition. Switching to AHCI mode makes Windows non-bootable. I did find a promising solution to this here, but I have not yet tried it out. (Update: I’ve tried it out, and it worked, I now have a Fedora install to boot to).

And that’s about it, in all I like this laptop, I don’t predict any major issues getting Linux on this thing if I can get past that RST vs. ACHI thing. I’m hoping that the GeForce card in this machine is easier to deal with than the Discrete adapter that was in my Dell, we’ll see. Would I buy it again? Yea, I think so, especially if you’re not worried about running linux on your machine. It does Windows pretty well, and aside from an annoyance or two, its a decent machine.

1 Response to A week with the Lenovo Legion y740